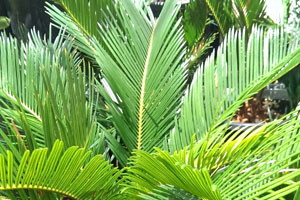 Canine ‘Cuddles’ is a 3 year old female Jack Russell Terrier who owes her life to her attentive owners. They noticed she has vomited a couple of times and was not quite herself. They also noticed that their new addition to the garden, which had only been in place for two hours, was somewhat worse for wear.

Cycads are a variety of plant that is commonly found in Queensland gardens as they are hardy and decorative. However, all parts of the plant contain a substance that is highly damaging to the liver. Within hours of being ingested, it can start to cause a breakdown of the liver cells. In the majority of animals that eat Cycads, the signs are noticed after significant liver damage has already occurred and the poisoning is usually fatal.

As Cuddles’ misdemeanour had been discovered so soon, treatment was much more likely to be successful. She was admitted to hospital, put on a drip, and had her stomach and gastrointestinal tract emptied under general anaesthetic. She was also given oral medications to reduce any further absorption of the toxin from her gastrointestinal tract, as well as medication to support her liver function during this time. She spent several days in hospital being carefully monitored, and had repeated blood tests to assess her liver function. After a few worrying days, she started to show improvement in her blood tests and returned to her normal playful self.

Cuddles is one of the few animals to have survived Cycad toxicity. As previously mentioned, despite aggressive treatment, it is usually fatal for animals that eat these plants. It is a timely reminder to all of us to be familiar with the types of plants we have in our gardens.

If you have any concerns about the potential toxicity of plants in your garden, internet research can be useful for identifying the plant and determining it potential for toxicity. Alternatively, the staff at Animal Emergency Service are always willing to help out with any queries you may have.