As seen on episode 1 – Bondi Vet: Coast To Coast

Our much-loved kennel-hand Maree recently became a client too, when her heavily pregnant, glowing Golden Retriever Greta visited our Gold Coast hospital for a vital checkup. At full-term, Greta was expected to pop any day; with Maree facing the difficult possibility of not being in the country for the birth due to heartbreaking circumstances.

Animal Emergency Service Directors and Veterinarians Dr Alex Hynes and Dr Gerardo Poli were the first to greet Maree and her beloved, fun-loving, mumma-to-be. Bets were placed on how many furry bundles of joy Greta was soon to deliver… but Alex was suddenly concerned with the surprisingly large potential litter. Any birth is dangerous, but more pups mean less room and higher complications. The x-ray revealed a whopping 12 very closely overlapping puppies. This meant the possibility of a high-risk birth due to the sheer number of pups competing for blood supply and nutrition. 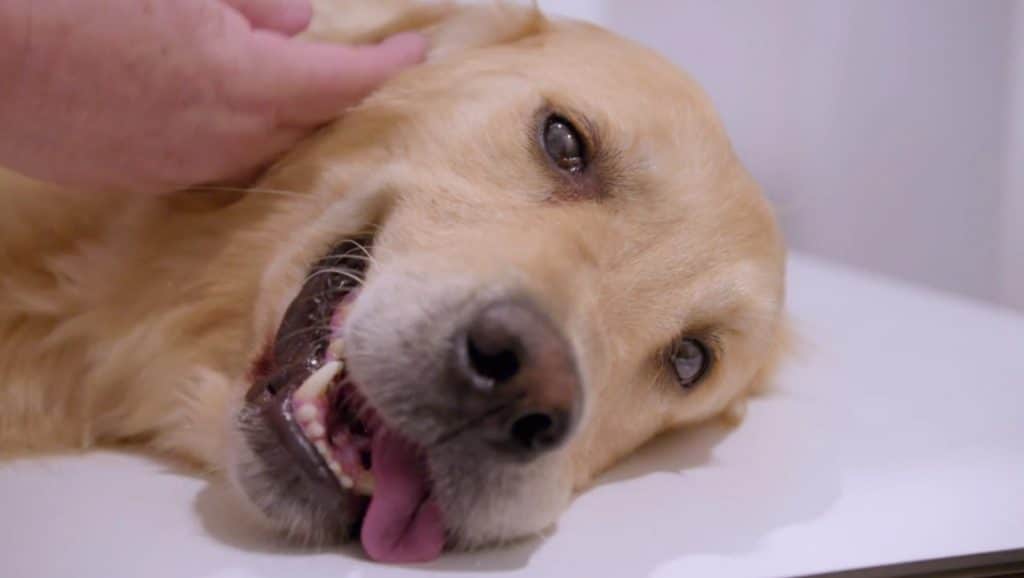 After performing an ultrasound, everyone breathed a sigh of relief as Dr Gerardo confirmed the heart rate of all puppies to be well within the healthy range. Maree was soon to be a very busy nana! Although everything appeared to be looking good, with such a large litter to deliver, Alex prepared Maree with the possibility of Greta requiring an emergency c-section during the birth, to which she agreed to go ahead with if necessary.

Heartbreakingly, Maree’s mother was recently diagnosed with terminal cancer, and with a sudden and devastating prognosis of just days left, Maree had to return to New Zealand to be with her mother in her final moments – most likely while Greta was giving birth. Faced with such a difficult decision, Alex and Gerardo put Maree’s mind at ease reassuring they would be by Greta’s side when needed. 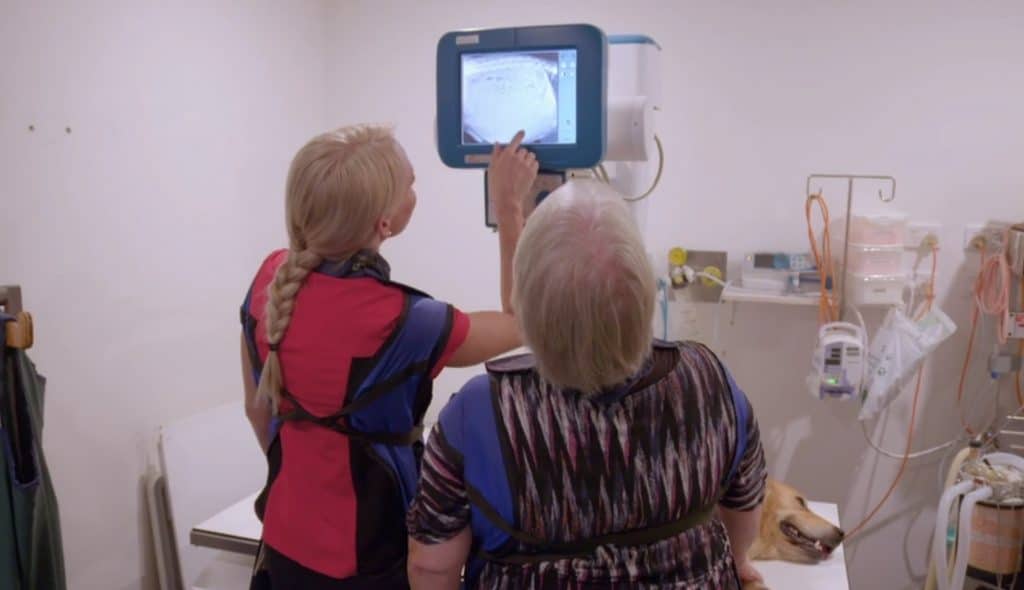 A few days later, Greta went into labour and began to deliver her tribe of puppies, well looked after by family friend Judith and daughter Melody in support while Maree was away. As promised, the two dedicated veterinarians made a special house call and raced to be by Greta’s side as she gave birth. 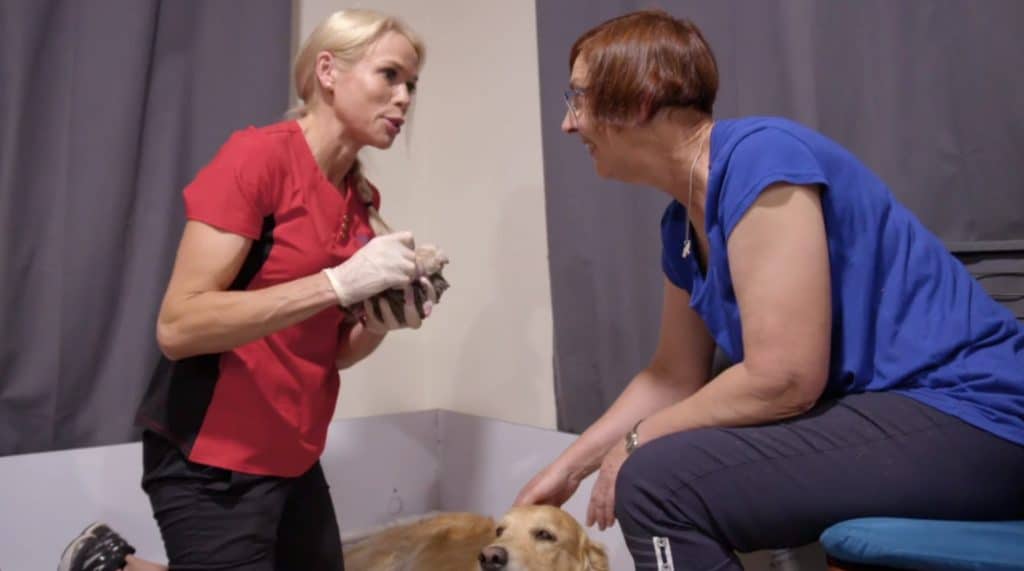 By the time Alex and Gerardo arrived, Greta had already given birth to five healthy puppies – three boys, and two girls. Greta was a born-to-be new mum, making perfect progress eagerly licking her babies; a necessary practice that helps to expel fluid from their lungs to encourage them to breathe. This simple action brings on those all-important first few breaths and gorgeous puppy squeaks! 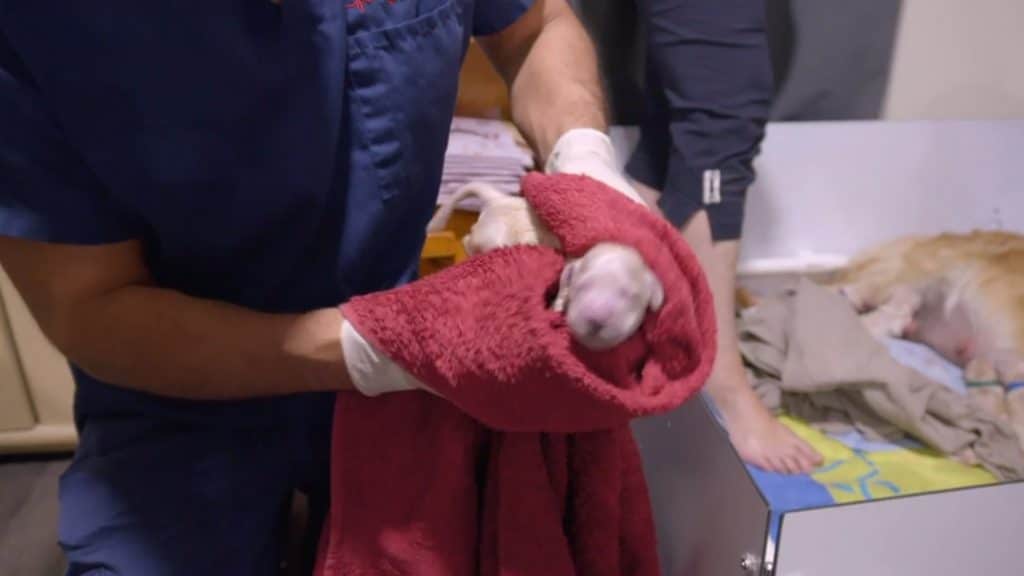 Suddenly Dr Alex noticed little pup five was a bit blue and Dr Gerardo stepped in to help start the pup’s breathing, by mimicking the licking motions of Greta through vigorous hand motions. To everyone’s relief “Mr Blue” begun breathing. Greta, although doing an incredible job, was starting to feel the strain. But there was no time for rest as puppy six suddenly made his arrival. 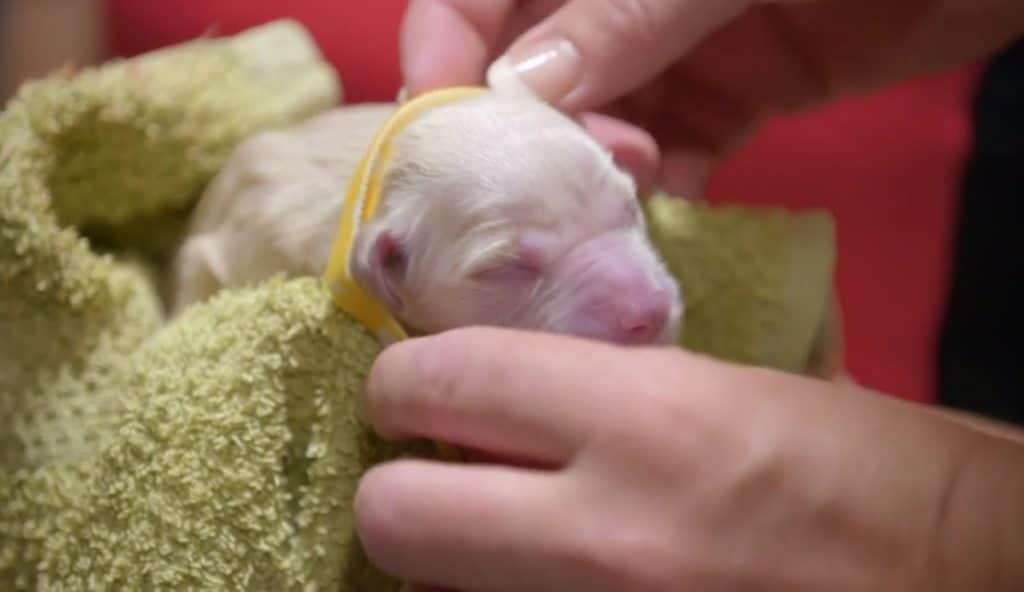 The veterinarians helped Greta deliver each of her babies, while Maree watched lovingly from New Zealand via FaceTime. Having just attended her mother’s funeral earlier that morning, it had been a tragic day for Maree’s family. On one of the saddest days, being able to see her beloved fur baby brought much-needed comfort and a smile back to Maree’s face as she watched Greta deliver another three healthy pups. 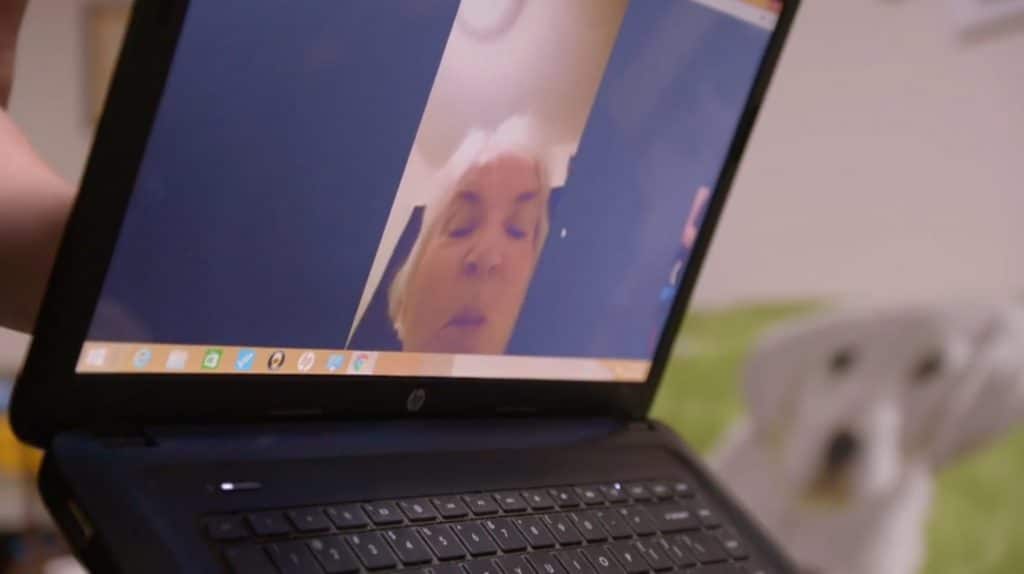 But as the tenth puppy arrived, Dr Alex knew something was terribly wrong. She immediately handed the tiny blue pup to Dr Gerardo, who pumped air into her lungs, trying to resuscitate the poorly pup with a worried Greta watching on. With a faint heartbeat and no breaths taken, the team had tried their best to bring her back but sadly, the tenth puppy was gone. Another devastating blow for Maree. 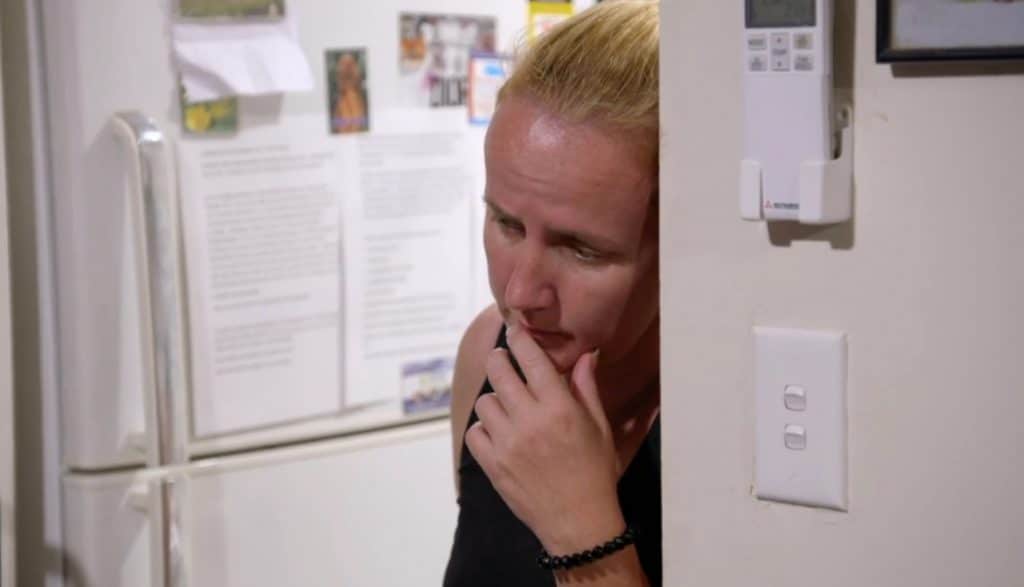 The focus quickly moved back to Greta and her last two deliveries. Shortly after, puppies number 11 and 12 were born, bursting with gorgeous little squeaks. As Dr Alex removed the placenta sack of the surprisingly large last-born puppy, they discovered he was a little boy. 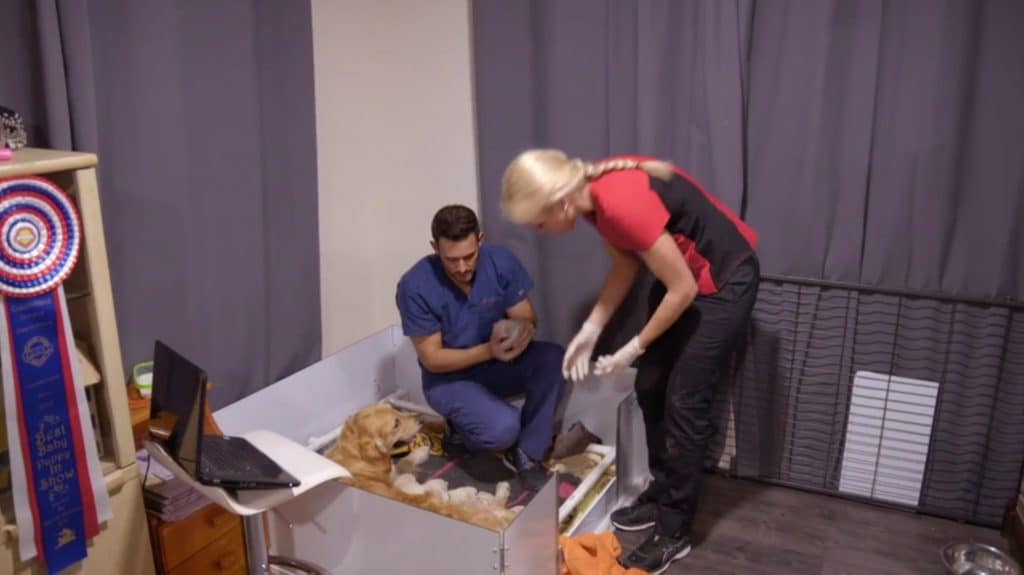 Greta was the perfect new first-time mum, licking all of her puppies as they fed from her, with mum Maree adoring the precious moments over FaceTime. Drs Alex and Gerardo have witnessed many puppy births in their extensive veterinary careers but with Maree being part of the Animal Emergency Service family, this experience was extra special. The privilege of bringing new life into Maree’s family, especially during such a tragic time, will not be forgotten.

A week later Drs Alex and Gerardo, excited to check-in on Greta and Maree, do another special house call to check the health of the puppies. As they walk in and see Greta acing mum-life already, attentively caring to her perfectly healthy pups, they realise this is no longer necessary. 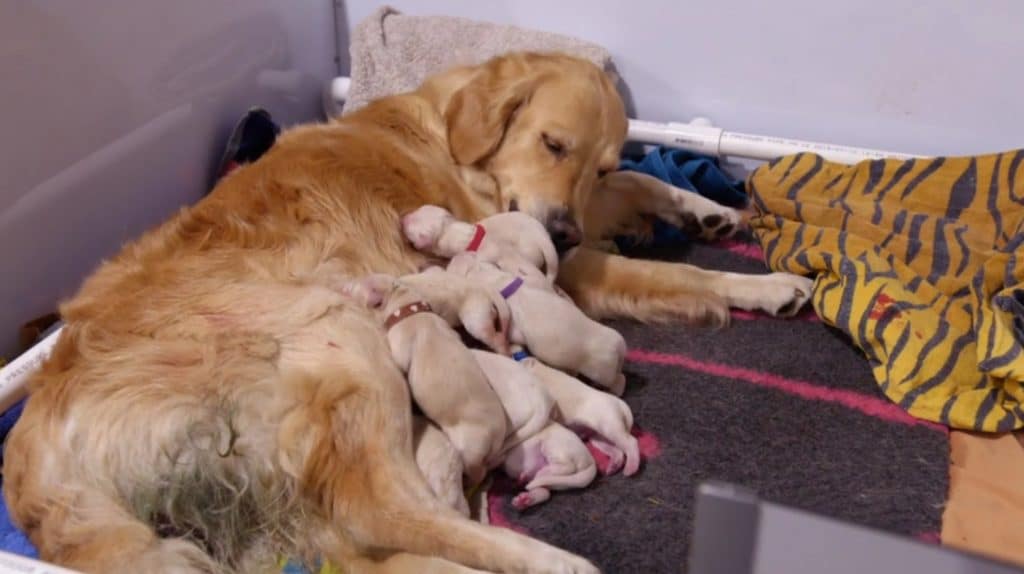 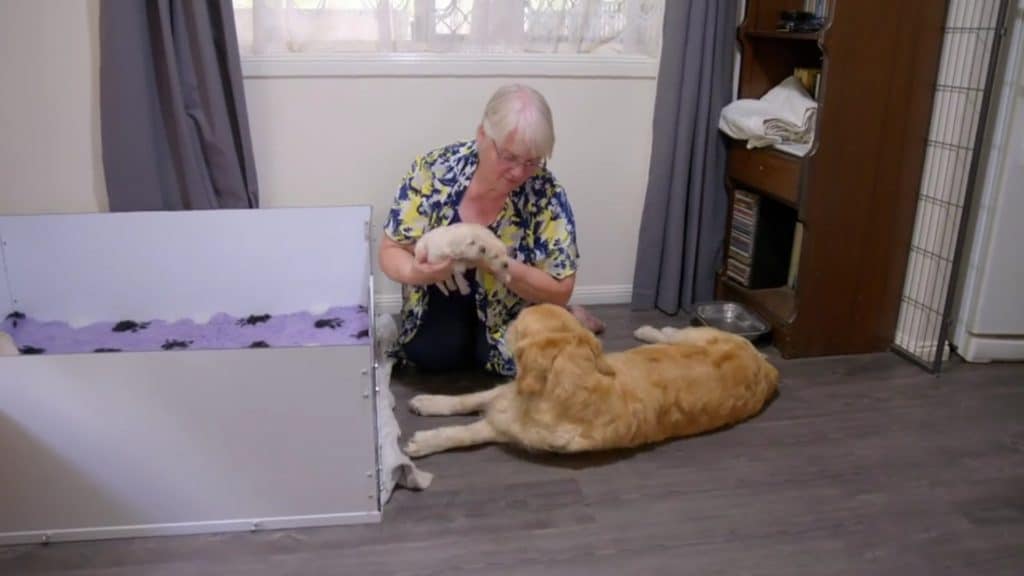 Greta is the light of Maree’s life. Now blessed with 11 extra mini Greta’s, Maree is one busy nana! A healing gift during a difficult time.

“Cases like this are why I wanted to become a vet in the first place. I love my work, and I love what I do. This is more than a job. This is my way of making a difference in the world” – Dr Alex Hynes 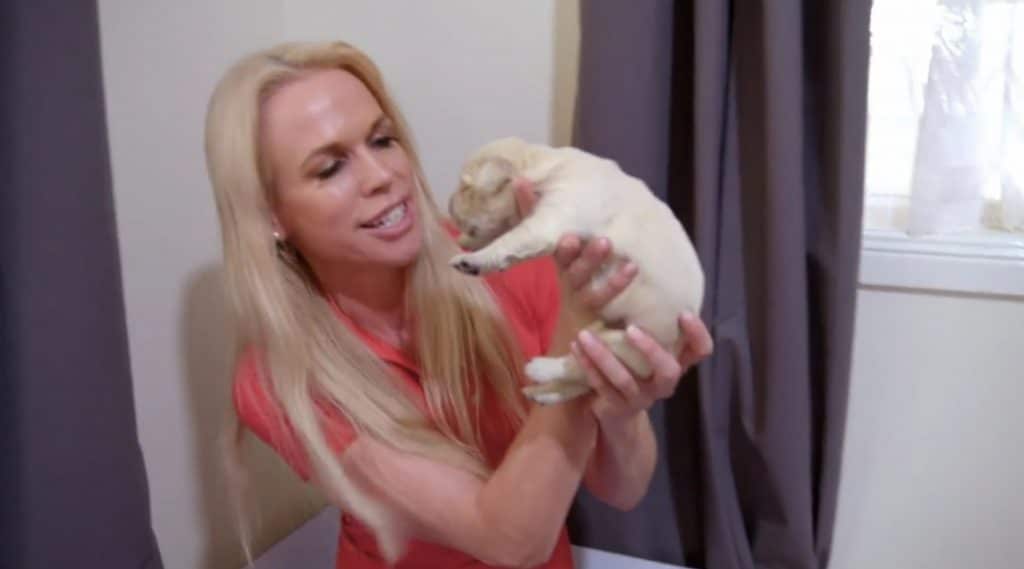 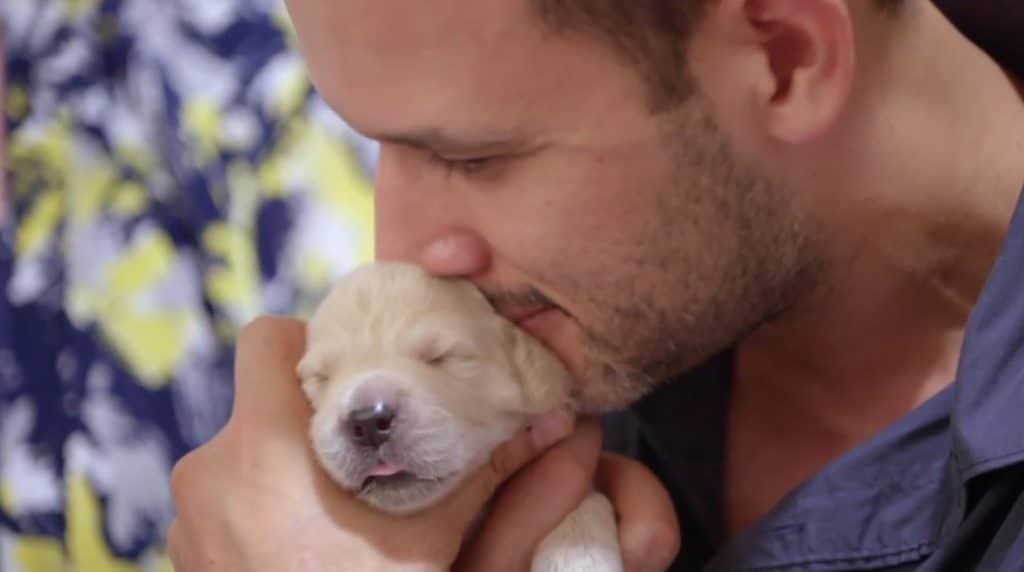