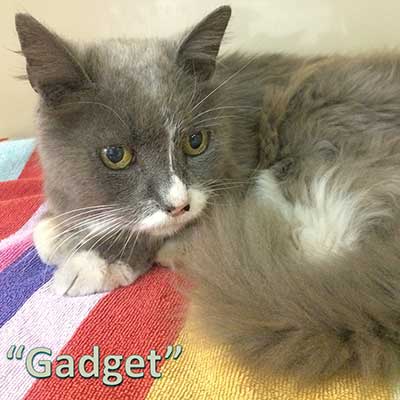 Gadget is a 17 year old Domestic Short Hair. He disappeared 3 and a half weeks ago and decided to waltz casually home yesterday. Gadget’s mum said it was the best Mother’s Day present ever as she was sure he had passed away.

Gadget presented to Animal Emergency Service emaciated. He had a sore hip, was very weak and had many fleas. He was admitted to hospital for treatment and close monitoring of his kidneys. Gadget’s kidney function was found to be remarkably good, though he was diagnosed with urinary tract infection.

Gadget’s was treated for fleas, given pain relief for his hip and medication for his urinary tract infection. He was also rehydrated and commenced on a nutrition plan. It is important to slowly reintroduce nutrition (due to the high possibility of starvation during his absence) to avoid the development of re-feeding syndrome

Gadget improved after a night in hospital at Animal Emergency Service and he was transferred to his Primary Veterinarian when they opened this morning. We wish him a speedy recovery!