Tank’s battle through anaemia, arrhythmias and a splenectomy

Noticing that their dog, Poor old Tank the loveable senior Cattle Dog X wasn’t feeling well, his caring owner took him to their family vet. After examination, Tank was quickly referred to Animal Emergency Service Underwood, as he presented off colour and lethargic. After a thorough examination by the team, blood work showed that he was suffering from anaemia – a reduced number of red blood cells or hemoglobin circulating within Tank’s bloodstream, and the discovery of a mass in his abdomen.

Tank was given pain relief and fluid therapy so further diagnostics could be performed. An ultrasound showed a splenic mass with free fluid, and when a sample of the fluid was taken, it was found to be blood. The decision was made for Tank to undergo surgery to remove his spleen and the mass that evening, however, he required further stabilization and a blood transfusion before he could have the procedure.

Tank was admitted to Animal Emergency Service Underwood’s neighbouring company, Pet Intensive Care Unit (Pet ICU) for the blood transfusion because of the nature of the intensive therapy involved in his treatment. Being admitted to Pet ICU meant Tank would be closely monitored to ensure no reactions occurred, with the added benefit of operating within the same building as AES – making for a quick transfer between companies. The blood transfusion was successfully completed, where Vets began to focus on the mass located in Tank’s spleen. 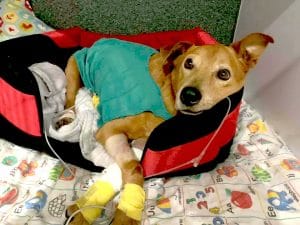 Once stable enough, the poorly Cattle Dog X underwent anaesthetic with AES Underwood before being quickly rushed off to the theatre. The Veterinary team performed a splenectomy, removing the spleen and the mass, totalling 2kg in weight. Whilst Tank’s initial surgery went without complications, once the spleen and mass were removed, he went into shock. As a result of the shock, Tank’s blood pressure dropped, his heart rate increased and he became pale. The nurses quickly gave him an additional two blood transfusions to give Tank a fighting chance to survive.

Thankfully, the blood transfusions were successful and he was stabilised and set to recover under the watchful eyes of the Pet ICU Nurses who provided round-the-clock care. Tank recovered uneventfully from his general anesthetic, however, shortly after developed life-threatening arrhythmias in his heart – a common condition to develop after undergoing spleen removal. As Tank was already undergoing constant ECG monitoring, the arrhythmias were picked up early in his recovery. Veterinarians started Tank on a number of cardiac medications to control the arrhythmias, luckily subsiding a few days after they appeared.

Upon initial presentation, although unwell, Tank was very scared of being in the hospital – a new and unfamiliar environment often presents a scary face to our pets, especially when they are ill. However, after days of nursing and veterinary care from both the AES and Pet ICU Underwood teams, he finally developed trust with the team. Throughout his recovery (and as many dogs do), Tank began licking at his wounds. In normal circumstances, an e-collar would be placed on the dog to prevent Tank from licking his wounds for risk of infection. Tank would not tolerate an e-collar – so inventive Senior Veterinary Nurse, Hayley, made a T-Shirt out of a pillowcase to cover his wounds – making for a fashionable accessory and allowing for his comfort – also stopping him from licking at his wounds.

After a few days recovering in the Pet ICU, and with regular checks, monitoring and tests, Tank was well enough to go home to his amazingly committed and caring owner. Both teams at AES and Pet ICU were excited to see Tank recover so well from his ordeal and were sad to say goodbye to the brave Cattle Dog X.